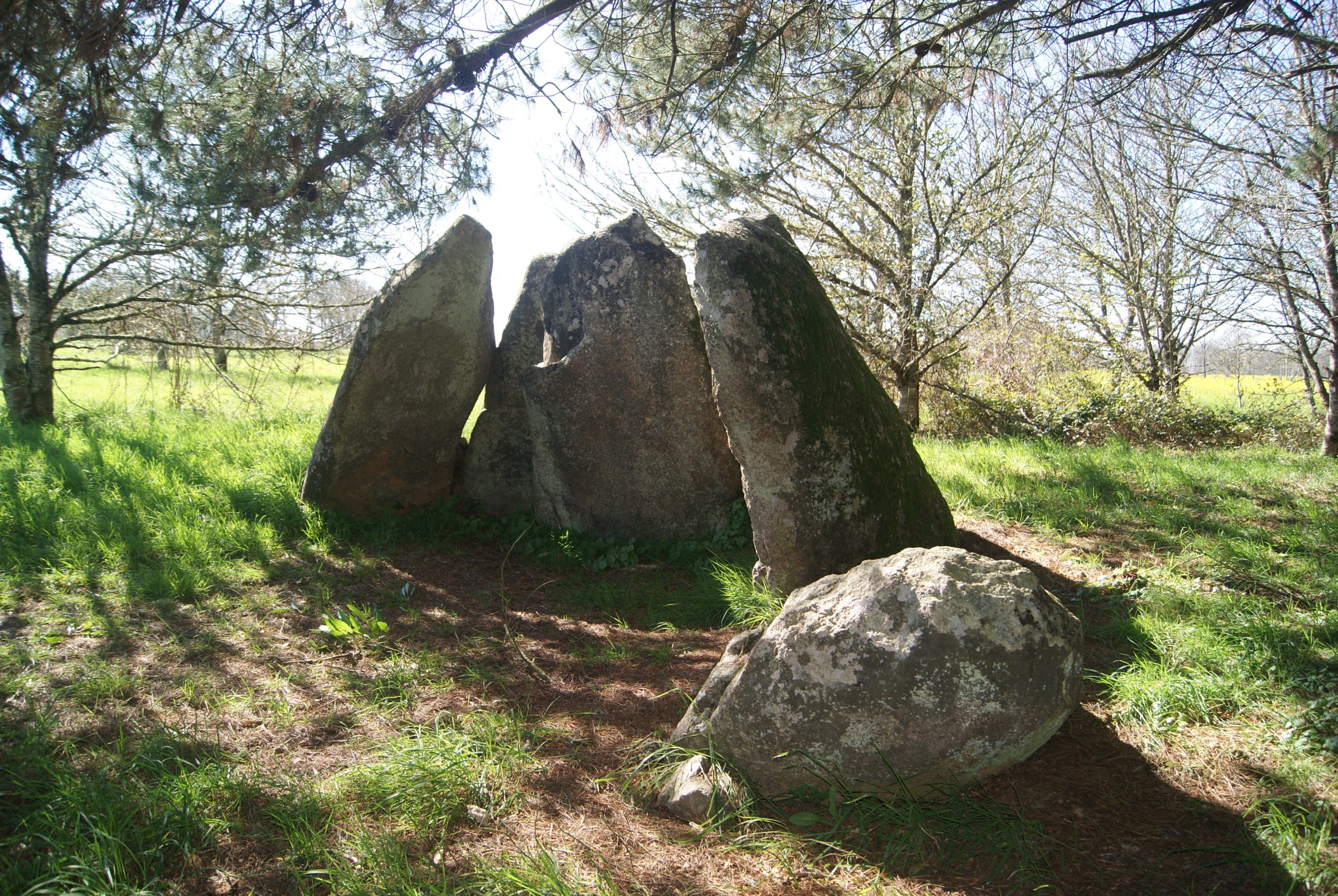 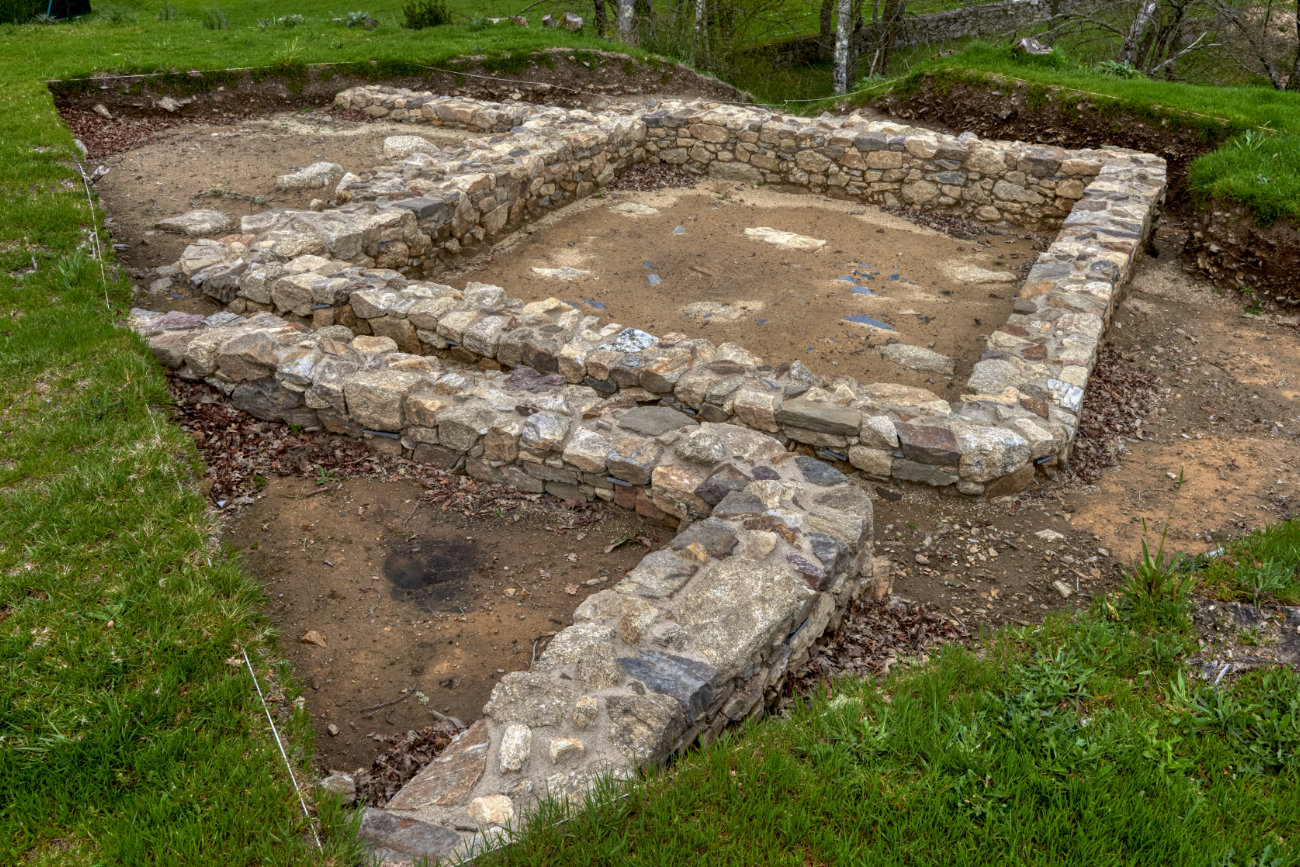 The municipality of O Saviñao has an abundant and valuable heritage. In archeology, it is worth highlighting the Anta de Abuime or Mamoas de Abuime field; located in a plain of the Saviñao parish about four kilometers from Escairón, a large part of them are preserved from it.

In civil architecture there are different among which we can highlight:

– The pazo de Vilelos, with an L-shaped plan, with a chapel of about one hundred square meters and flanked by the shields of the Ulloa, who ran this pazo for several generations; Its founders were Juan González de Ulloa and Catalina López from Sober.

– The Arxeriz pazo that was owned by Juan López Súarez (Xan de Forcados), its first founder was Gonzalo Raxo, a knight of the Order of Santiago in the mid-16th century. It has a square floor plan and its two coats of arms stand out on the north façade of the pazo; it has numerous annexes that were recently restored.

– House of Abadía de Santo Esteban de Ribas de Miño, is surrounded by a stone wall and is accessed by a portal with a semicircular arch, has a rectangular floor plan and a small exterior chapel. – Pazo das Cortes, located opposite the Romanesque church of San Pelayo de Diomondi, has a U-shaped plan and attached a chapel dedicated to Our Lady of the Assumption. Next to the façade there are the shields of the Somoza family, from the 18th century.

The only building that we can consider of military architecture in O Saviñao is the Candaira tower-fort in Rebordaos, it is from the 13th century, with a square plan measuring 9.81 by 9.94 meters; It consists of three floors, in the last one are the battlements. Don Francisco de Garza de Quiroga Taboada and Álvarez de Castro, Lord of Tor, owned the tower. At present, it is owned by Mr. Álvaro Taboada de Zúñiga. In addition to these pazos we can mention: The pazo de Lamaquebrada in Fión, the pazo de Casadonas in Licin, the Pazo de Fraguas in Louredo, Casa Grande de Mosiños, … etc and more houses that are part of the heritage of O Saviñao. 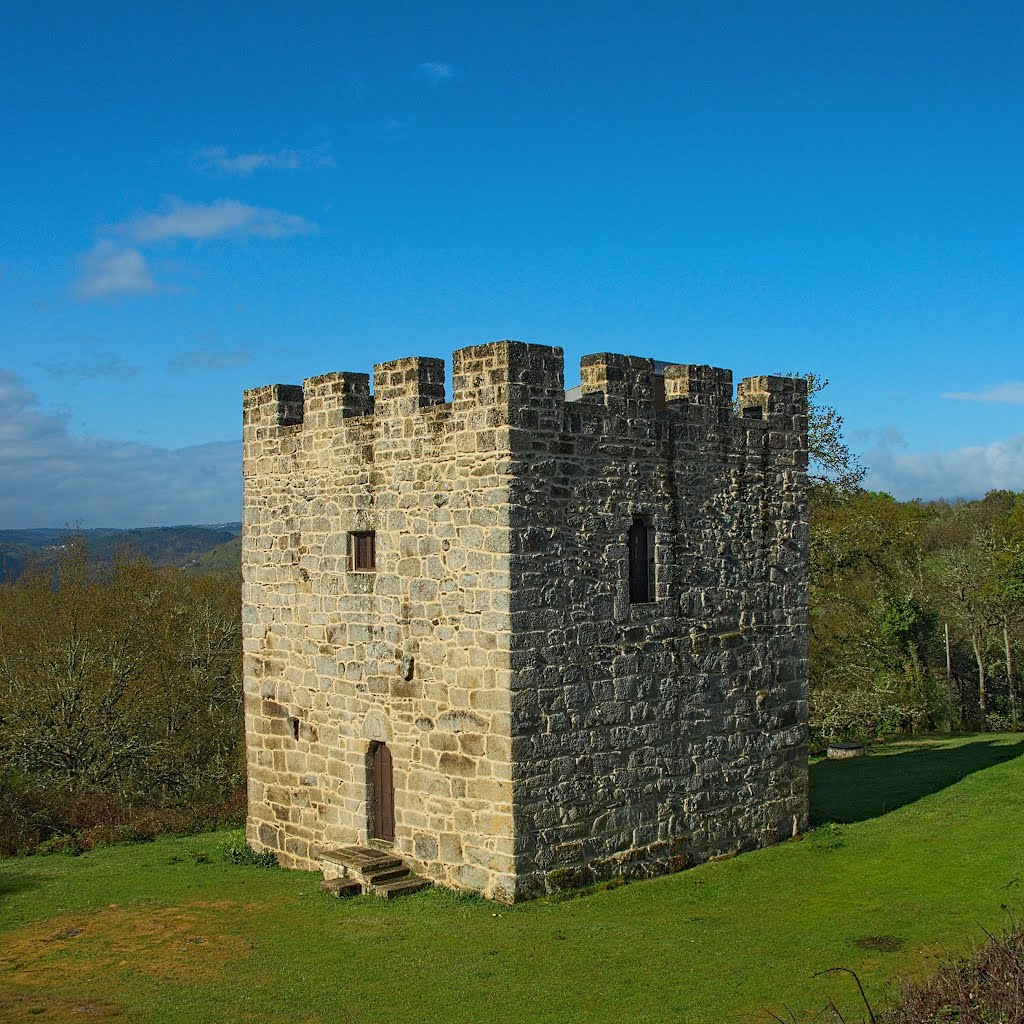 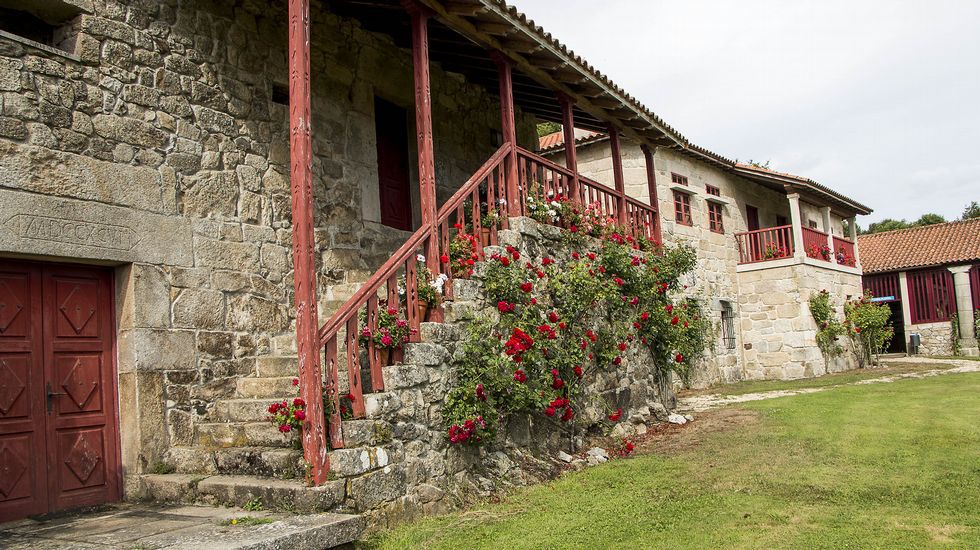 Within the heritage of O Saviñao, the Romanesque churches that exist in this municipality have special relevance.

– San Martiño de a Cova, comes from the old monastery of the order of San Agustín whose priory was suppressed in 1824. The work has a rectangular floor plan with nave and apse, the main door has a semicircular arch with two archivolts in baquetón. Inside, the barrel vault and apse paintings from the seventeenth century stand out, representing the Holy Trinity and three altarpieces from the seventeenth and eighteenth centuries.

– San Lorenzo de Fión, from the Romanesque work the apse and two sections of the first third of the 12th century are preserved, the head is semicircular and offers three fragments divided by attached columns to the outside. Inside it has three altarpieces and wall paintings from the 16th century.

– Santa María de Seteventos. This church from the end of the 12th century, preserves the characteristics of the Romanesque in the Ribeira Sacra, but in addition some mural paintings in a triumphal arch and adjoining wall are preserved, presided over by the Pantocrator, showing us the qualities of the blessed and the figures monsters from hell.

– Santa María de Marrube, the plant consists of a nave and apse, the triumphal arch has plant ornamentation; on the outside the main door stands out, flared with three archivolts in baquetón; Inside, the mural paintings that cover the shell and the vault where the figure of the Savior and the Child Jesus appear receiving gifts in the arms of the Virgin Mary stand out.

– San Estevo de Rivas de Miño. It is also a national monument since 1931. It has a base and an apse; the nave divided into four compartments by pointed arches and the apse with a barrel vault and a semicircular section. On the outside, the main façade stands out with its flared door with four semicircular archivolts on marble columns. In the minor archivolt it presents seven seated figures that evoke the old men of the apocalypse; it also has a rose window almost four meters in diameter.

– San Pelayo de Diomondi was declared a national monument on June 3, 1931; It is a temple of monastic origin with a rectangular floor plan and a nave divided into five parts by pointed semicircular arches. On the outside, the main flared door stands out, with four toric archivolts with smooth shafts and historiated capitals. The north elevation is covered by the episcopal palace, which was the summer residence of the bishops of the diocese of Lugo.

– San Vitorio de Ribas de Miño. The Sancristía was added to this Romanesque style church, it consists of a nave and apse, with a semicircular triumphal arch. On the outside, the main door stands out with three archivolts that rest on columns with smooth shafts; Inside there is an image of the Virgin of the Rosary and a gold and silver monstrance. 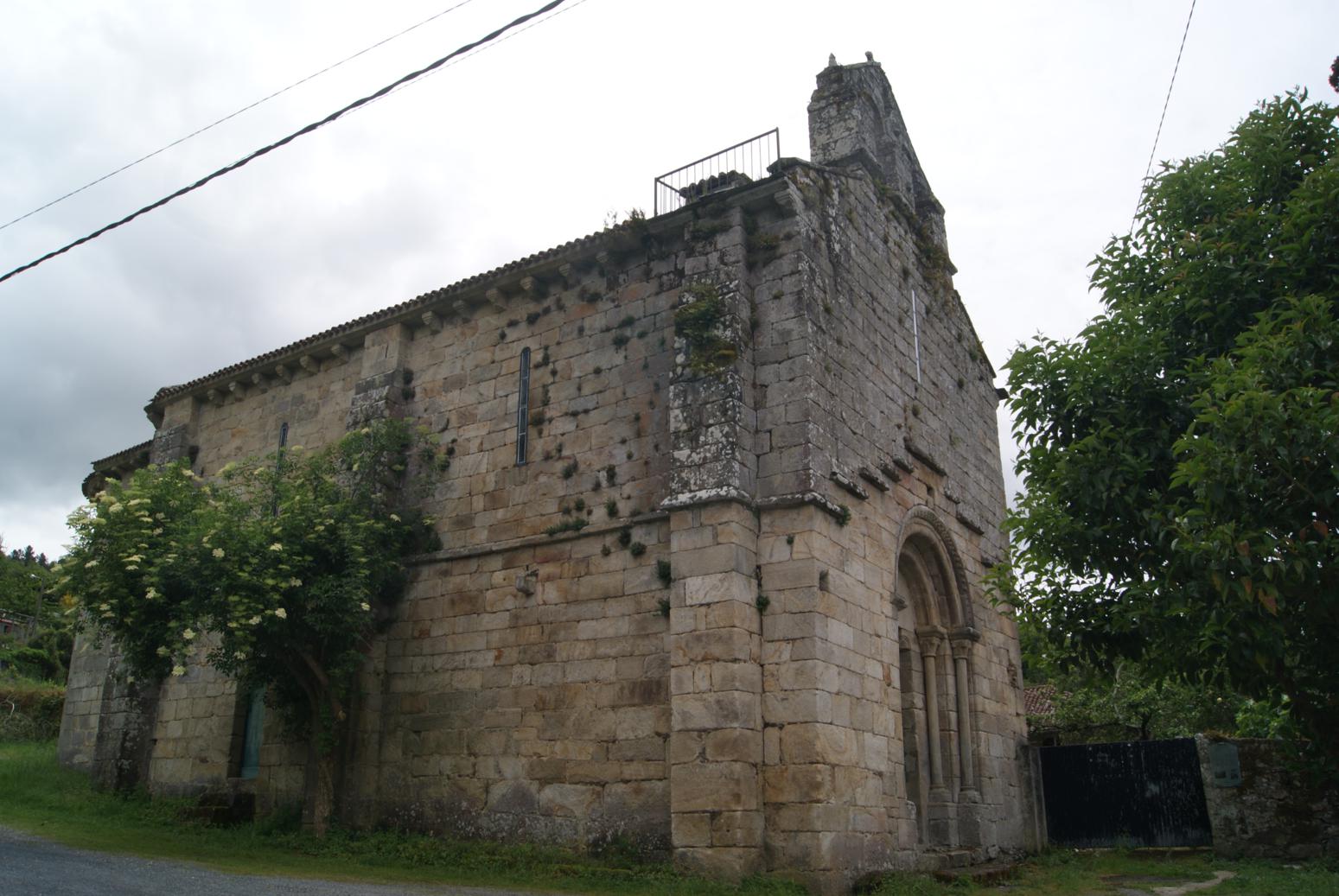 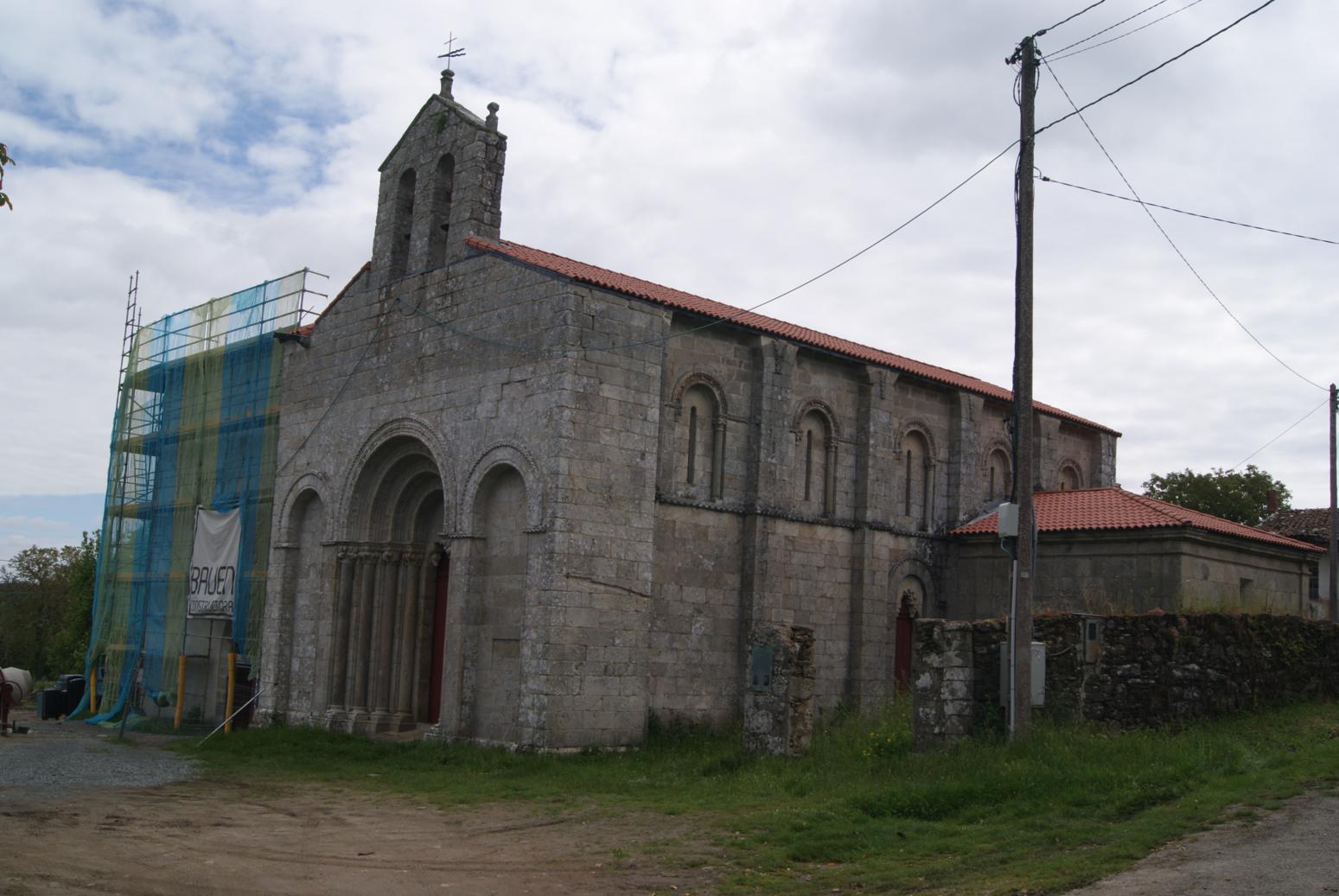 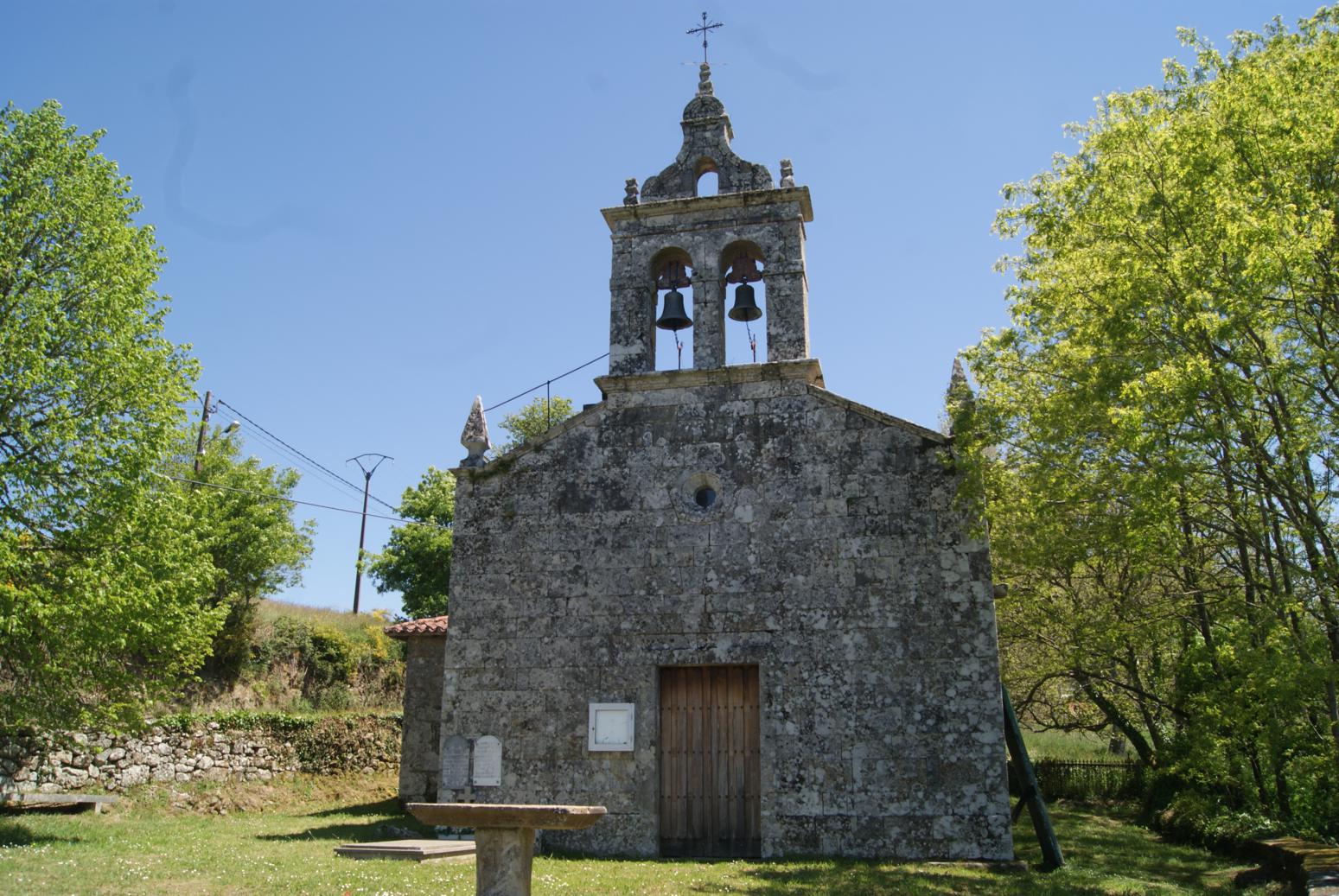 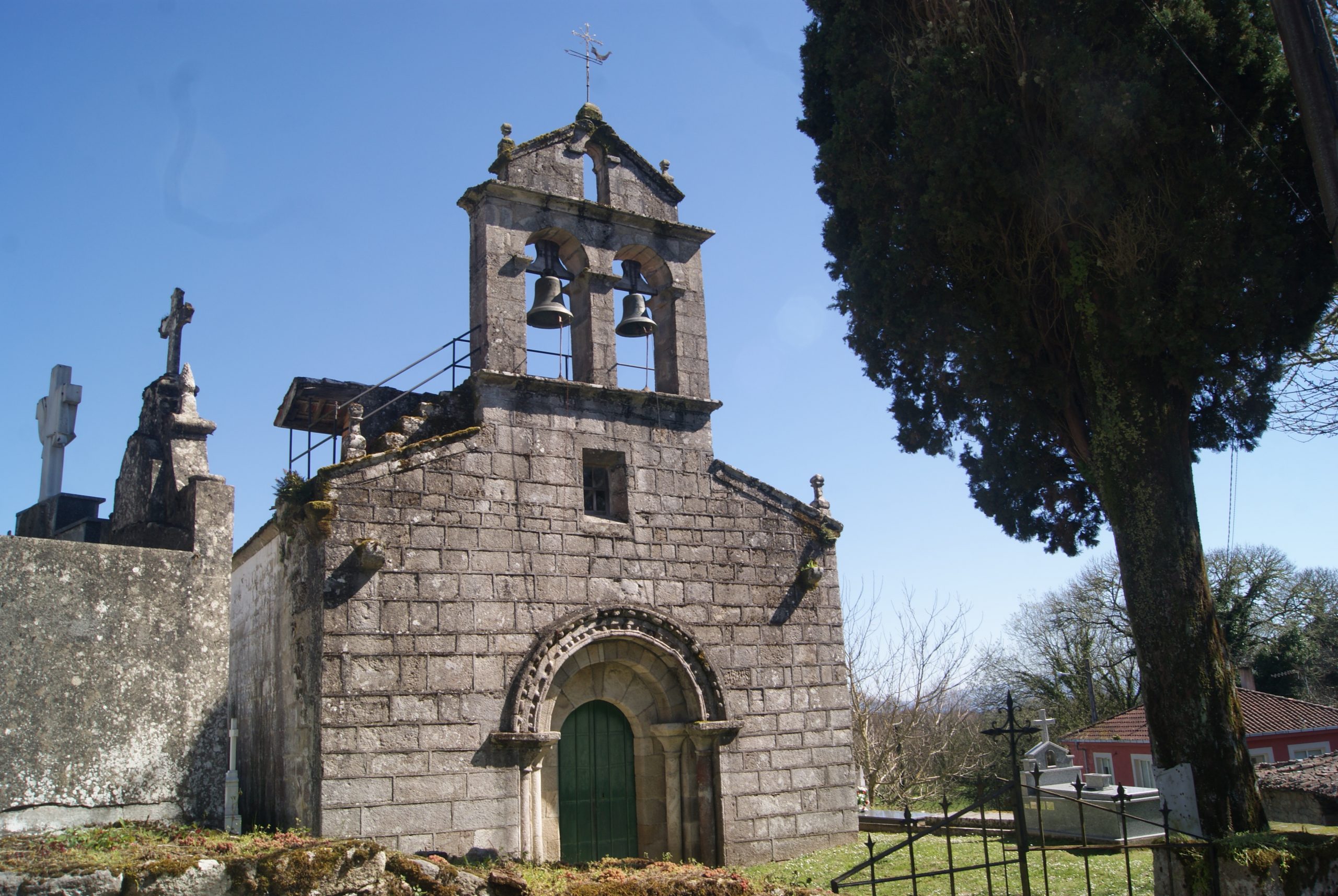 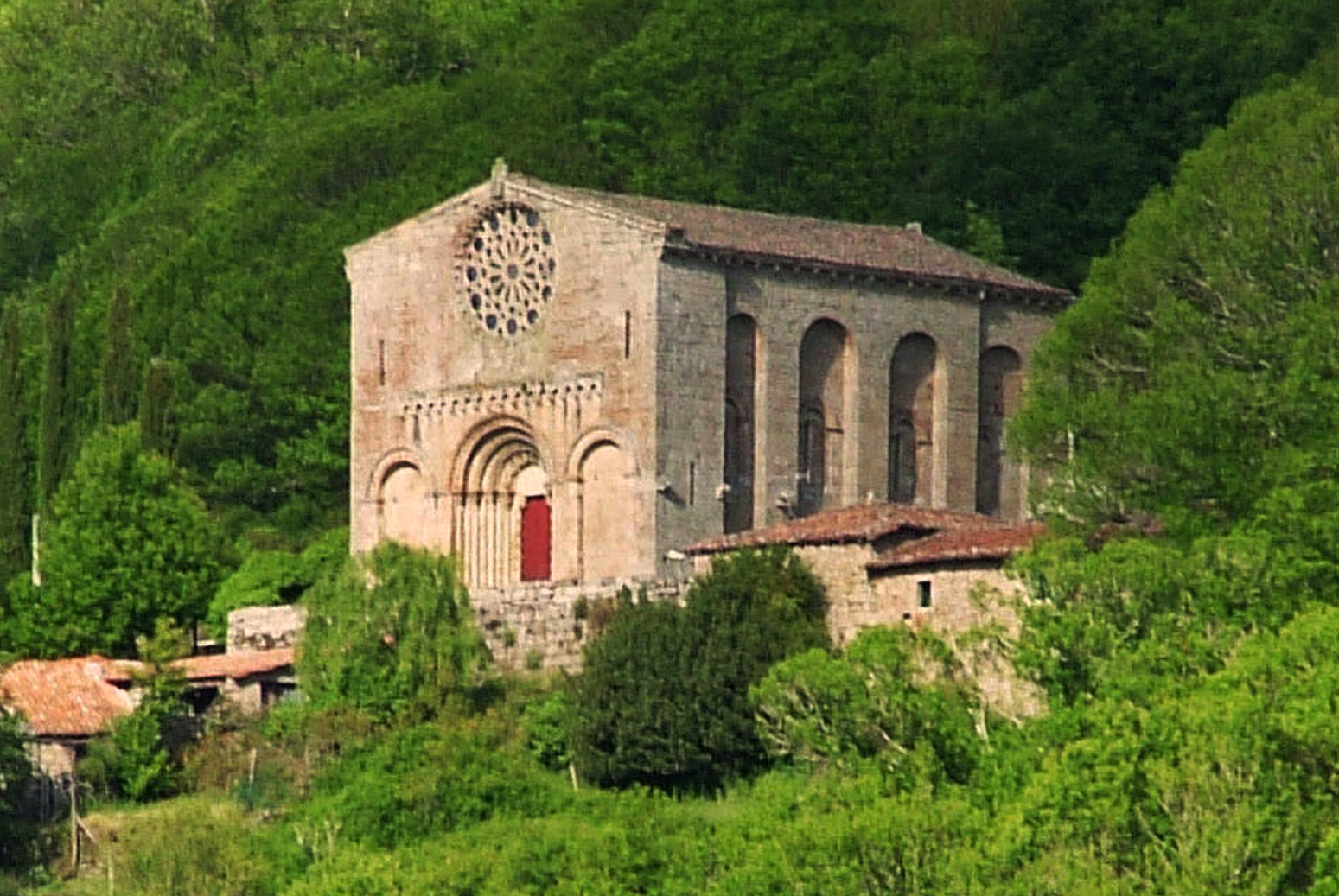 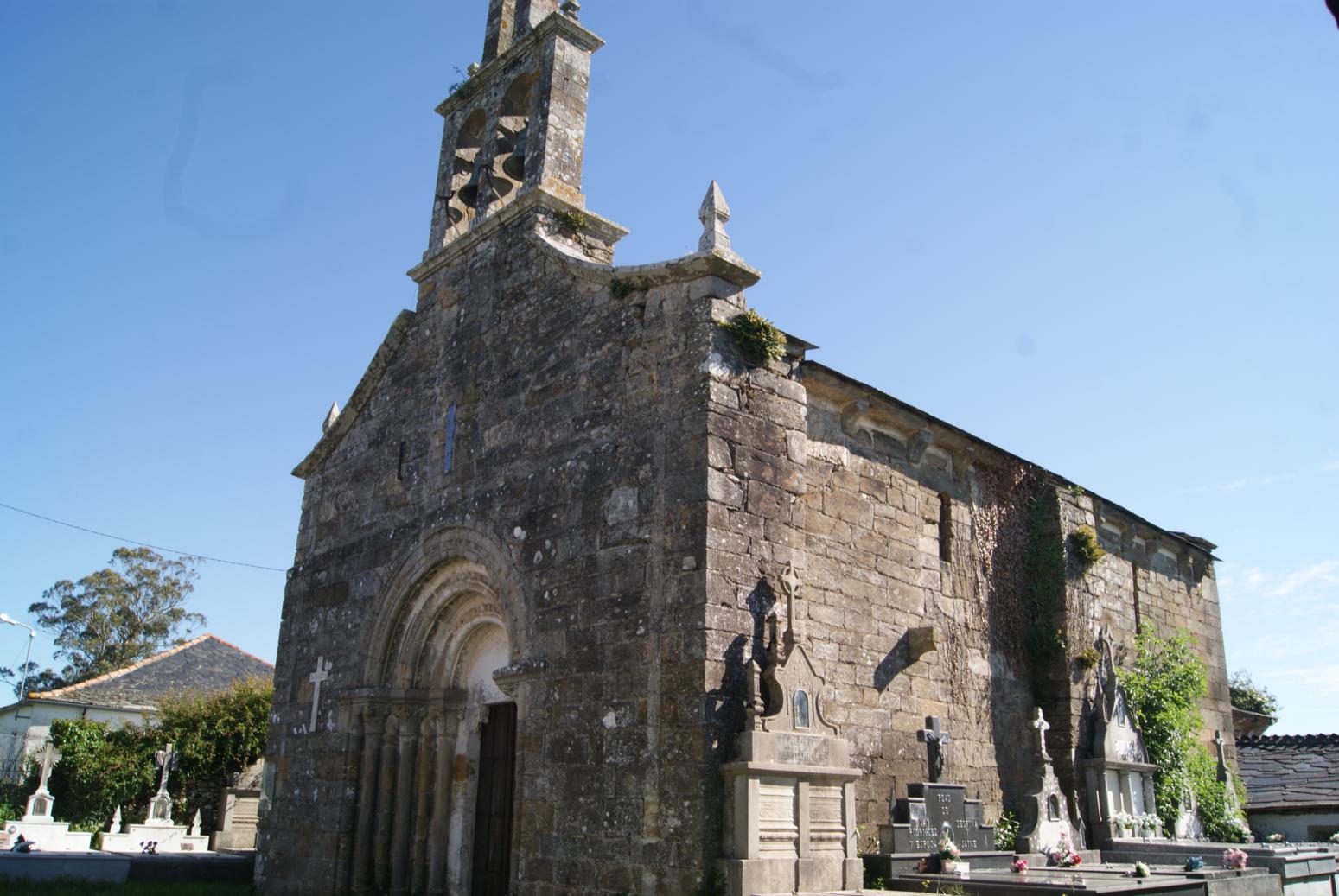 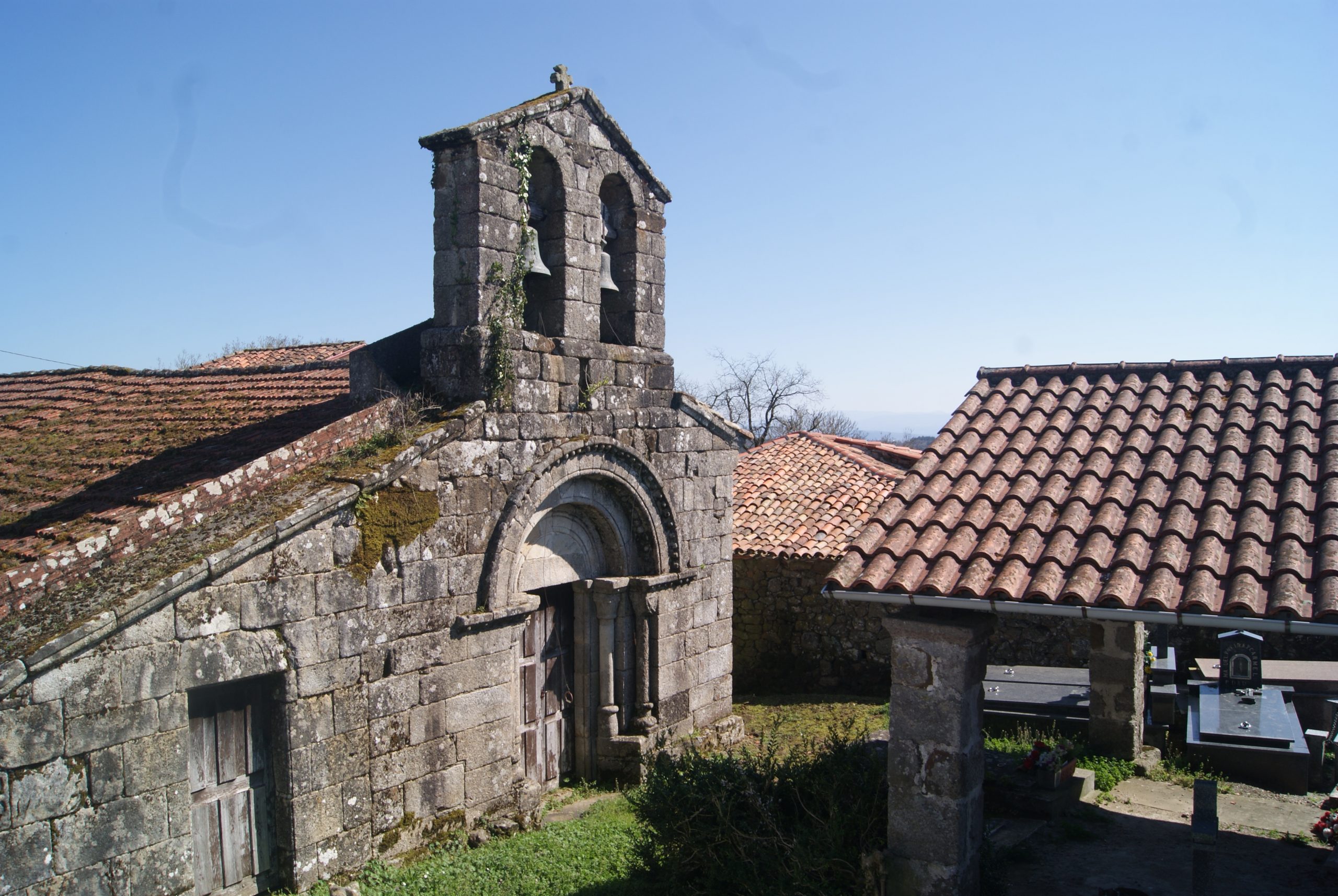